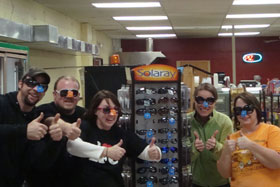 This is your classic egg/chicken story with one twist. And that twist is a pumpkin.

It all started soon after Al Sandow’s dad died in 1984. His mother needed something to occupy her time and soon her home at 4277 North Eastman Road was bright with homegrown tomatoes, glads and pumpkins. Chickens added to the color.

So caught up in the revelry of it all, Delia Sandow, was soon selling pumpkins for $.25 each. Folks had grown accustomed to stopping to buy eggs so pumpkins seemed a natural outgrowth. What’s more, customers were so treasured that Delia would invite them in for breakfast or at least, insist they take home freshly baked cookies. No charge, of course.

At a sturdy 4 foot, 8 inches, white-haired Delia Sandow was not ready for the rocking chair – not by any means. She was destined to become the matriarch of the family, a title she’d likely laugh at.

Grandma’s Pumpkin Patch soon became legend in Midland County. It was easy to reach, just five and one-half miles north on Eastman Road from Meijer’s.  Soon, a simple pumpkin experience blossomed into an autumn revelry with a corn maze, petting farm, farm animals in a real farm setting, a haunted house and of course, fresh donuts. Grandma Delia’s job? Sugaring the deep-fried donuts as they emerged from the fryer.

Running a pumpkin patch may seem like an easy, couple of week project. Not so here. The entire Sandow family – Al, his take-charge wife Maria and their kids Amanda, Casey and Lee as well as Al’s sister Suzie Beaudin and her family all pitched in. As did neighborhood kids beginning two months before it opened in mid-September.

Harvesting pumpkins from the 20-acre farm is a lot of work and high school kids living nearby took to the task as well as guarding the maze, wrestling the pigs, setting up the petting farm and other tasks that go with such an enterprise. For many, it was their first job and first paycheck.

Amanda, the youngest daughter and with her degree in Human Resources, ruled the empire and insisted each employee adopt her Five S rule of employment: Safe, smooth, spotless, service and smiling.

Many of the pumpkin pickers and maze guards have graduated to new positions in the latest addition to the Sandow enterprise.

In June 2010, Al and Maria took over the Larkin Food Center, a Larkin Township retail fixture dating back to the 1940s. Al remembers walking across Eastman Road from his home to the store, then an IGA franchise where several checkout lanes greeted customers. It was like a big time grocery store in a small part of Midland County.

Now, why would they ever want to take on such a venture?

Maria explains the store provided a nice seasonal fit. The family was busy in autumn with Grandma’s Pumpkin Patch. In 2001, they launched Earthmovers, an excavating company at which Al & Maria both work. But both were seasonal businesses and being admitted hard-working folks, they thought, well, why not.

Walk into Larkin Food Center now and you will be greeted by any one of 13 employees, many of who started as pumpkin patch kids.  Need a grocery or personal care item not stocked? Well, mention it and chances are, it will be in stock on your next visit.

“We base our inventory on what our customers need,” Maria explains.

A commercial kitchen staffed by cooks who begin work at 5 a.m. provide a hot breakfast bar and a bit later, hot lunch bar. And on Friday and Saturday evenings, a hot dinner bar.

Patrons mostly make their selection pay by the pound and enjoy their meal while at work or at home.  It is not a sit-down restaurant, as that would require complicated licensing and a lot of hassle.

If you need to eat right there, you can pull up a chair in the ice cream parlor adjacent to the store. The parlor has its official opening this summer. Last year it was a hardware store. Now, it’s a bright place to enjoy extraordinary ice cream by Hersey’s, Hudsonville and Ashby.  Smith’s Dairy of Ohio provides the soft serve ingredients.

So what’s it like to operate a business open every day, most hours of the day?

Al likens it to his herd of dairy cattle: All work, every day.

And Maria calls it a “Family Adventure.”

And the cool thing about it is that it works.